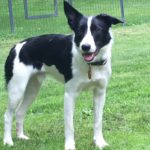 Brand new rescue “Bran” – AKC name It’s a Bran Newe Day, CGC, CD-C, CDX-C,TKN, TKI, RL2, HIT, BCAT. (Levels 1-2 both Award of Merit) Fitting I think for a rescue dog. 15 months old. I don’t know much about him, because I just got him today, but he’s very sweet and hope to see new changes for him! His foster home told me that “dog” is his super power!

I rescued Finn in March of 2012 and he’s now 10 years old. He has a natural sensitivity when being a neutral dog, is hysterically funny, loves to be a demo dog and everyone that sees him falls in love. And even my big dogs love him and let him get away with almost everything. His nickname is Guido the Mosquito!

She’s now 8 years old, Shetland Sheepdog, she is a dream. She’s very smart, funny and cute! I’m looking forward to a bright future with her. Her nickname is an old Indian name, “Stomach-With-Legs.”

Those that have gone before

I named her after the movie The Saint where Emma always asks Simon, “But how will I find you?” and he always replies, “Don’t worry, I’ll find you – you found me.” She sometimes had her own way of doing things…my all time favorite memory – we were working toward her first UD and doing pretty good during one run. (“OMG, we’re going to Q!!!!”). I was setting her up for the directed jumping. Judge was just about to ask me if I was ready. Without waiting for me to answer, Emma ran out perfectly straight, turned, sat, took one jump, came front, finished, did the 2nd go out, turned, sat and took the other jump, front and finish – all without me cueing anything whatsoever. We all roared with laughter and to this day, I still laugh.

Beau was a fantastic all around dog – loved kids, loved to play, loved walks in the woods. When Cody was getting older and disoriented, I’d tell Beau to “go find Cody” and he would! He was always game to try anything, although he never got the point of tracking. Gotta love those herding breeds! He was a fabulous neutral dog and a great demo dog. Beau had a great sense of humor, was always happy and even to the very end, wouldn’t give me the toy when I asked him to.

Out of all of my Border collies, Beau was the favorite of so many. Each of my dogs have taught me so much and Beau wasn’t the exception. Sometimes he had his own ideas about things <g> We will all miss your sunny, happy presence little man. “Go find Cody” – he’s waiting for you.

Shadow touched so many lives with his story and recovery – mine more than anyone. He taught me much more than I ever taught him and I wouldn’t be the person/trainer I am today if he hadn’t come into my life 12-1/2 years ago. Shadow continues to bring hope to people with aggressive dogs and his legacy will live on forever.

True story: A few years ago, I spoke with an animal communicator because I had questions for all of the dogs. I asked Shadow (because at the time, there was still a hesitation when meeting new people), “Is it a trust issue that you can’t get more comfortable with new people (trust in me to keep him safe)?” His answer: “I do trust you, I just need my space sometimes.” So then I asked him; “So how come when I’m doing R.E.W.A.R.D. Zone seminars, you run up to everyone and jump in their laps?” His answer: “Because I want them to know that there is hope for their own aggressive dogs.” Those of you that have been to The R.E.W.A.R.D. Zone here in NJ, know this to be true!

He was funny, smart, a pain in the ass sometimes, sweet, loving and even though in the beginning he wanted to be good, he didn’t know how. But as the years went by, he truly became the dog he wanted to be, loving up complete strangers that came to the house.

He will forever be my shadow.

Cody was the best all around dog – great with dogs, people, kids, puppies. Solid, dependable, gentle, handsome, smart and loving. He loved being a demo dog because he was able to mooch extra treats just by his good looks and charm. He will be sorely missed and loved forever.